Join us as we celebrate Australia Day

Commencing at 8.30am on Sunday 26th January, the celebations will commence with the Civic Reception and Community Breakfast.

We invite the community to join with us as celebrate our great Nation, and give recognition to members of the community through the Australia Day Awards Presentations.

Awards will be presented to

John has enjoyed an extensive career in corporate entertainment, stage, radio and television in his home state of Tasmania for over 20 years for a variety of companies and organisations.  On the mainland stage, John has recently been playing COWARDLY LION in the Australian touring production of Wizard of Oz, and has previously appeared as Stewpot in Opera Australia’s South Pacific, Dick Woollnough/Dee Anthony in The Boy From OZ for The Production Co., Mitch in The Threepenny Opera for Malthouse and STC, Spider/Lord Savage in Jeckyll & Hyde for TML in Korea, Mr. Braithwaite in Billy Elliott, The Musical for Universal/Working Title, and Pumbaa in The Lion King for Disney Theatrical Productions in Perth, Melbourne and Shanghai.

His Television credits include The Keyttering Incident (Foxtel), Winners and Losers (7 Network), Tricky Business (Nine network), Dance Academy (ABC), City Homicide (7 Network) and John Safran's Race Relations (ABC). His Film credits include A Journey Through Time with Anthony (Zhou Xun), Macbeth 1040 AD for Dark Oak Films, The Sound Of One Hand Clapping for Artist Services and Back From The Dead for Pocket Money Productions and his voice can be heard in the films Legend of the Guardians, AUSTRALIA, Daybreakers, Mao’s Last Dancer, Two Fists One Heart, in mini-series for CLEO, False Witness, Scorched, and on TV shows Wild Boys, Rescue Special Ops and Slide.

In 2006 John was nominated for a Mo Award for his role as Pumbaa in The Lion King. John is a Public School Ambassador, an Australia Day Ambassador, a finalist in 2015 Tasmanian Australian of the year, a co-founder and board member of Hobart independent actor’s company Blue Cow Theatre Inc. and a broadcaster on ABC local radio. John is also the Artistic director of the Australian Musical Theatre Festival.”

At 11.00am, join us for the Australia Day Family Pool Day at the George Town Swimming Pool.   Entry is by gold coin donation.  Come along and enjoy the fun Australia Day Activities, Pool Games, Laser Tag, Jumping Castle, BBQ, and Live Music. 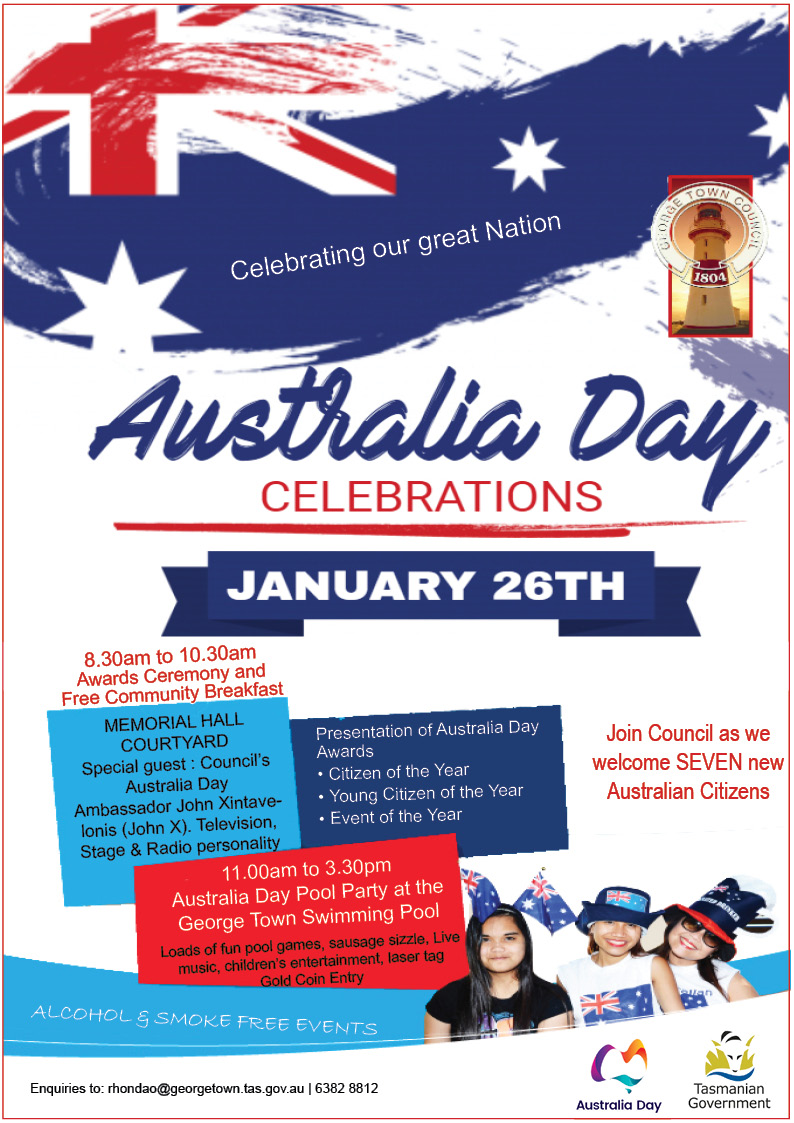