If you are concerned about stray and roaming cats near you, the Cat Management Act includes rules for trapping cats (seizing, detaining, destroying and releasing). Always treat animals humanely and respect their welfare (the Animal Welfare Act applies).

Under amendments to the Cat Management Act coming into force 1 March 2021:

TassieCat has good information here that will help you and your neighbourhood if you are concerned about stray or roaming cat problems. Council does not have any facilities for the surrender and sheltering of cats.

You can find more information from the Department of Primary Industries, Parks, Water and Environment.

Download the Guidelines for trapping a cat in urban and peri-urban areas PDF below. 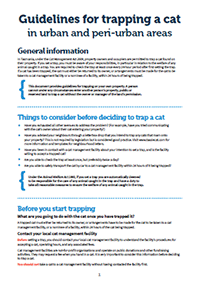